The Work of Chemical Society in Vojvodina

From The History of Organizing of Chemists And Technologists in Vojvodina.
Text by B.Abramović

The branch of Serbian Chemical Society was established on 23. March 1949. by engineer Ljudevit Slani [1] in Novi Sad. The first headquarters of branch were in Higher Pedagogical School – Platoneum [2]

The first president of Society was Viktor Kunc [3], professor at Higher Pedagogical School, from 1951. to 1963. and since then he was honorary president of the branch.

In 1951. a teaching section was formed, which main goal was improvement of teachers and modernization of curriculum in the field of chemistry. The president was Viktor Kunc.

The branch of Serbian Chemical Society was established also in Zrenjanin in 1952. President of the branch was dr Vojislav Borjanović, retired professor. And in 1954. the branch was formed in Subotica, whose first president was Ferenc Ćisar.

The first and one of the most significant publications of society was released in 1957. “The Guide Through The Industry of Vojvodina” which editor in chief was Viktor Kunc.

Dr Velimir Canić [4] became the president in 1963. He was associate professor at the Technological Faculty in Novi Sad. He was elected again for presidency from 1967. to 1971. and has recieved honorary presidency in 1975.

Headquarters of the branch were moved to The Institute of Chemistry of The University of Novi Sad [5]. The Expert Team of Students of Chemistry was formed.

Dr Borislav Tomić [6], professor at the Faculty of Technology in Novi Sad, was elected for president in 1982. until 1894. He was also president of society back in 1966. and gained honorary presidency in 2001.

Dr Miroslav Pergal [7] was then elected for president of society, from 1971. to 1973. He was associate proffesor at Faculty of Natural Sciencies And Mathematics (further in text we’ll use short version, FNSM). By this time, in 1971. The First Convention Of Chemists And Technologists In Vojvodina was held. And in 1972. The First Convention Of Students Of Pure And Applied Chemistry took place.

On December 23rd in 1977. Founding Assembly of Chemical Society of Vojvodina was held in Novi Sad. Assembly, whose chairmen/women were dr Olga Gašić, dr Ferenc Gaál and dr Miodrag Bogosavljević, adopts Statute and elects Executive and Supervisory board of the Society.

Dr Ferenc Gáal [9], associate professor at FNSM at University of Novi Sad, becomes president of Chemical Society of Vojvodina in 1980, until 1982.

From 1988. to 1990. dr Zoran Petrović [11] professor at Faculty of Technology is next president of Society. In 1990. dr Aleksandar Dudaković, associate professor becomes president.

A branch at Sremska Mitrovica is established in 1997. President of branch is Danica Desnica, professor of chemistry.

In 1998. dr Radmila Marinković – Nedučin [14], professor at the Faculty of Technology becomes president of Society, until 2000.

After two years of spontanious work, a branch of Society is established in Vršac, on November 24th 2000. President is Svetlana Radojković, dipl. Ing., and secretary Nikola Oluić, physicists and chemist.

Current president of Society is dr Goran Bošković [17], professor at the Faculty of Technology, 2009 –

Vojvodina Academy of Sciences and Arts

In 1979. Chemical Society of Vojvodina takes part in activities of establishing Vojvodina Academy of Sciences and Arts.

Dr Paula Putanov, professor of Faculty of Technology at the University of Novi Sad, was elected in 1979. for corresponding member for Vojvodina Academy of Sciences and Arts with support of Chemical Society of Vojvodina.

Union of chemical societies of Yugoslavia

Academician Paula Putanov was chosen for the president of Union of Chemical Societes of Yugoslavia, and dr Ferenc Gaál for secretary.

In past 60 years following branches were established:

As one of the most important activities of society, organizing scientific and other events can be considered as such. These assemblies/events can be divided into three categories:

Meeting of chemists of Vojvodina 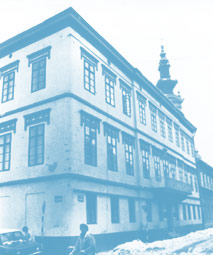